The MBS Turkey Challenge brings competition to the tarmac.

Jon McKeon remembers his first ever CrossFit competition. In 2005, the professional firefighter from Fort Collins started doing CrossFit with his firefighting buddies to get better at his job. (WODs better simulated firefighting situations in both timeframe and intensity than the typical bodybuilder, muscle isolation approach to working out.)

They didn’t go to a box. They went to your typical, generic gym where dropping weights was a no-no and if you walked away from the barbell to run a quick sprint on the treadmill, there was no guarantee the barbell would be there when you came back.

“All these boxes from Denver were there,” he said, “and they had matching T-shirts and they were getting coached.”

In the warmup area, McKeon found himself straining to hear how the coaches were directing their athletes. When he got back to Fort Collins, he told his friends that they were all missing out by not using a box. Soon after, he earned his Level One certification and in 2010, opened CrossFit Evolve.

The same year CrossFit Evolve opened, the MBS Turkey Challenge happened for the first time. Also birthed from a whim, the first Turkey Challenge came to be when MBS CrossFit owner and former Marine, Pat Burke, and his workout partner decided to record themselves doing a workout that they thought was competition material: a 5K followed by the CrossFit Total.

Almost immediately after finishing the workout, they put the video online, chose a date in November, and started inviting area CrossFitters to come and compete. According to Burke, about 70 people showed up that year, a response that blew him away. They were running out of plates during the CrossFit Total and when the third, mystery WOD came along, they rolled out surprises that athletes who were there that year still remember vividly: a four-foot wall to scale between burpees and climbing ropes which at that time were hard to find in Denver boxes. 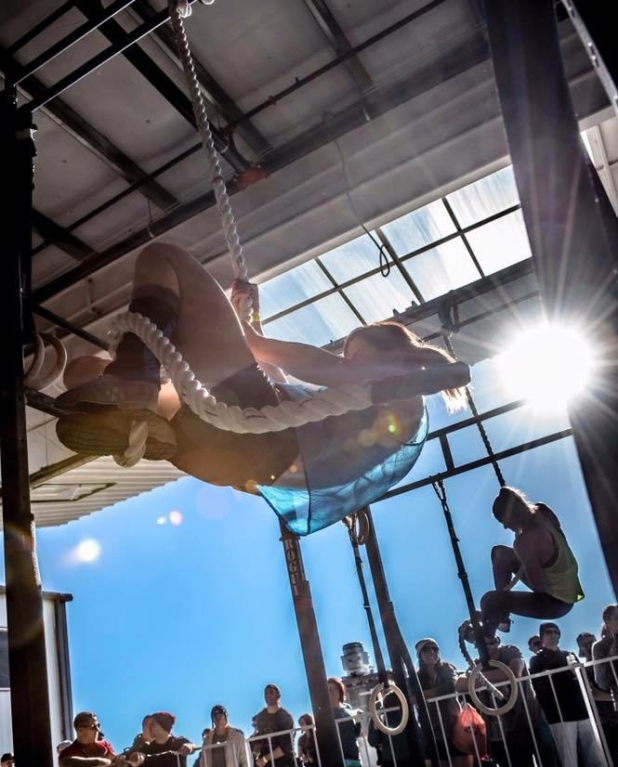 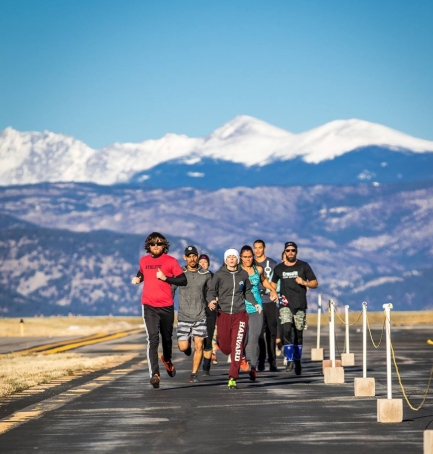 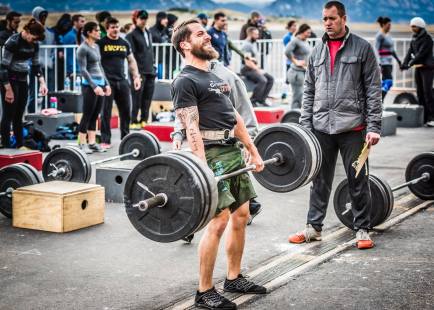 Ali Nichols, six months into CrossFit, had signed up for the Turkey Challenge as a way to meet people. She’d just moved to Denver and hadn’t yet landed at CrossFit Verve where she works out now.

“That first Turkey Challenge, no one could climb the ropes. No one,” she said.

But as soon as the competition was over and the athletes had left, determination set in. Next year, they’d be stronger. They’d conquer rope climbs, no problem.

The Turkey Challenge is Nichols’ favorite local CrossFit competition. From the programming (she always expects some sort of running) to the random movements and obstacles that are thrown into the floater WOD especially, to the overall atmosphere—she looks forward to all of it when she returns each year. She hasn’t missed a single Turkey Challenge. 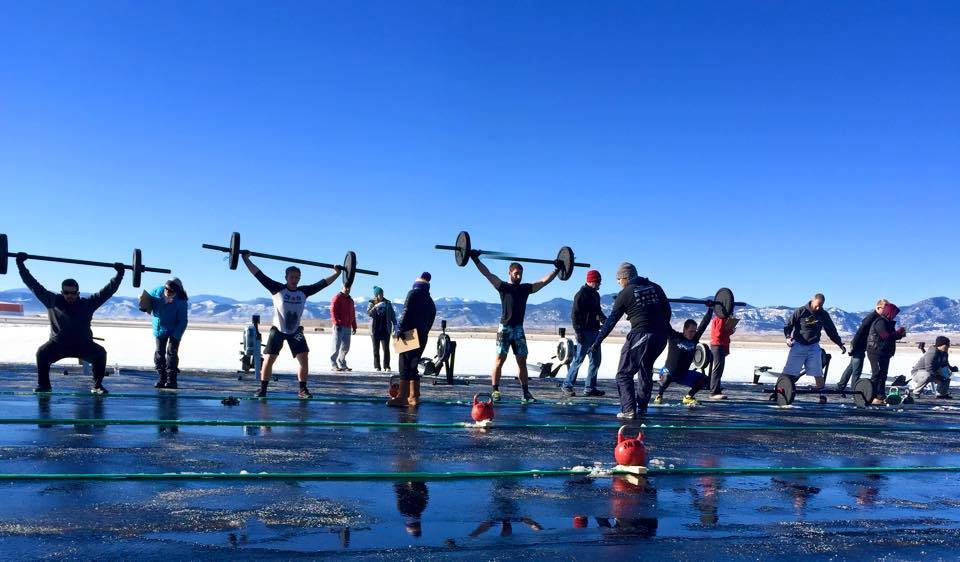 MBS CrossFit (Broomfield) is located in a hangar at Rocky Mountain Metropolitan Airport. It’s not part of the airport, but its back doors—both the small, human-sized one and the one made for aircrafts that’s essentially the entire wall—open up onto the tarmac. The mountains stand in layers in the distance, nothing blocking the view but the occasional plane.

So far, every Turkey Challenge but one has taken place here at MBS. Whether or not the giant hangar door is open for the competition depends on the weather, which in mid-November can be just about anything. Rain or shine, snowstorm or 62 degrees, the Turkey Challenge goes down, and athletes can find themselves outside, doing burpees in slush on the tarmac, or inside, climbing ropes in the heat.

The workouts are designed to challenge competitors both physically and mentally. Burke’s had teams do Lego-building relays, where a teammate runs to one end to study a designed Lego structure and runs back to their team to tell them how to put a pile of Legos together to match. Success requires strong communication, memory under pressure, and an understanding of how little plastic bricks fit together.

Burke thinks of teamwork differently, a fact he credits to his military experience. It’s not just what you can do individually in a team setting; it’s how you can work with one another to overcome obstacles on the way to achieving a common goal. You’re only as strong as your weakest link.

Burke was a Marine for five years beginning in 2000. In 2004, stationed in San Diego and dealing with a back injury, he accepted the offer to do a CrossFit workout with a captain in the parking lot. Burke had always seen the guy swinging a kettlebell on the pavement and thought it was weird, but working out with him changed Burke’s mind. Soon, the captain was taking Burke on Saturdays to a box in San Diego and Burke found himself at a competition at Mission Beach Park. He won a medicine ball.

In the Marines, Burke worked as a close combat instructor and excelled at it, but when he got out of the military in 2005, he struggled to adjust to civilian life where “close combat instructor” was basically useless on his resume. He worked a series of random jobs: bodyguard, construction, teaching martial arts courses at Buckley Air Force Base. He lost his house to foreclosure. He got divorced. CrossFit was the one constant in his life, the one thing he enjoyed and felt some sense of control over.

March 2008, with his Level One certification in hand, he started approaching area gyms about teaching CrossFit. No one was interested. Then he made a deal with a man who ran a batting cage out of the hangar. He rented out 800 square feet, bought a bunch of used equipment—a rower, squat rack, some barbells, slam balls, stall mats from actual horse stalls—and opened MBS.

“I figured I’d be able to last about six months before I had to cash it in and sell the shit back on CraigsList,” Burke said. “It was kind of a last ditch effort.”

What followed were a lot of long days and nonexistent weekends spent working on MBS, making it better, spreading the word, helping it grow. Along the way, Burke competed in six CrossFit Games—2008, 2009, 2010, 2012, and 2014—which helped the gym’s visibility. In 2015, MBS CrossFit’s second location opened in Arvada. Before that, just two and half years in, MBS put on the first Turkey Challenge.

Burke is a major factor in making the Turkey Challenge happen every year, but he’s not interested in getting attention for it. His favorite part about the competition is how it brings people together.

One year, it was less than 20 degrees outside and the workouts included running followed by a deadlift ladder, where barbells of increasing weight were set up on the parking lot and athletes would work up to a max deadlift. The weights were supposed to come from Rogue, but a snowstorm delayed the delivery. MBS was scrambling to pull everything together and Burke remembers CrossFit Roots, Conviction CrossFit, and other gyms stepping up to provide the weights needed for the ladder.

An aerial shot of the deadlift ladder in action is framed on the wall in Burke’s office. It’s one of his favorite moments from the past seven Turkey Challenges. 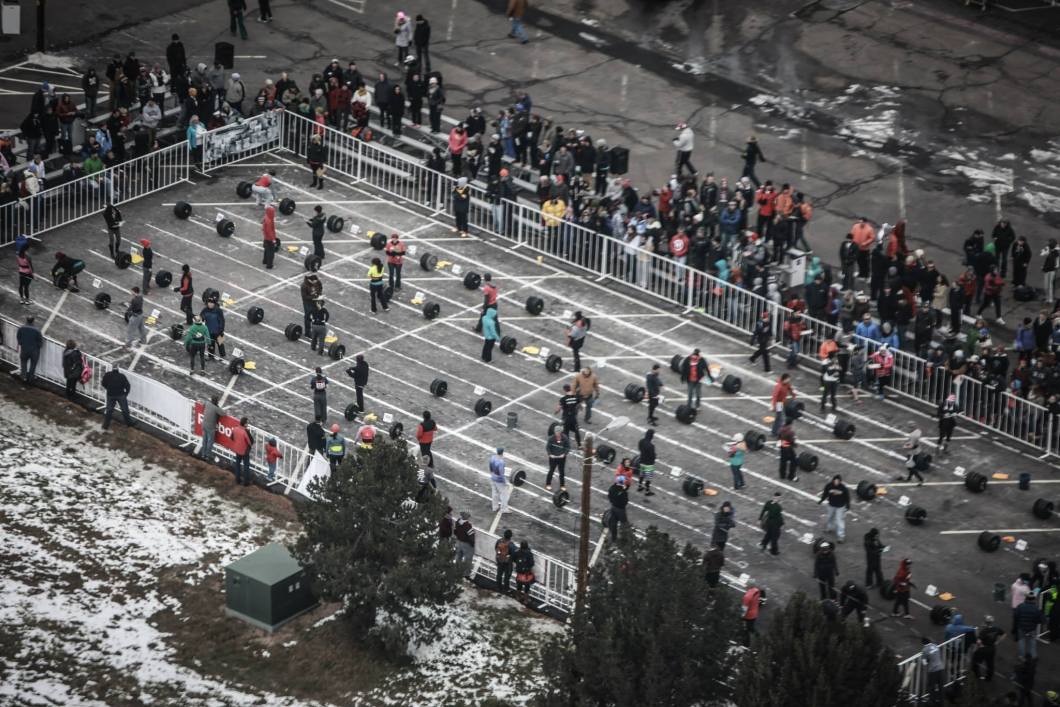 CrossFit Evolve shows up in force at the Turkey Challenge. McKeon came to the first competition in 2010, after opening Evolve, and hasn’t missed one year. His box sets up a tent and a propane heater, and its athletes wear the sort of T-shirts McKeon remembers from his first ever CrossFit competition. When an athlete expresses interest in competing, he tells them to do the Turkey Challenge.

“The programming is always really well done,” he said. “It’s always varied and there are always things that are unexpected in it, but it’s thoughtful.”

For beginners, he recommends paying close attention to heat times and getting into the warm-up area early. With multiple heats and divisions running at once and all the vendors alongside the actual competition, the Turkey Challenge has no shortage of action so it’s easy to lose track of time and neglect warming up or fueling. It can also help to find someone who’s done the challenge before.

As for the actual competition:

“It’s definitely a challenge,” he said. “You earn your Thanksgiving.”

So if you’re all about the pumpkin pie and stuffing, head over to MBS CrossFit on November 17-19. Registration to compete is closed (spots sell out almost right away), but there’s always room for one more in the crowd on the floor. Cheer on friends or strangers—or better, turn some strangers into friends. Who knows? You could find yourself competing beside them next year. 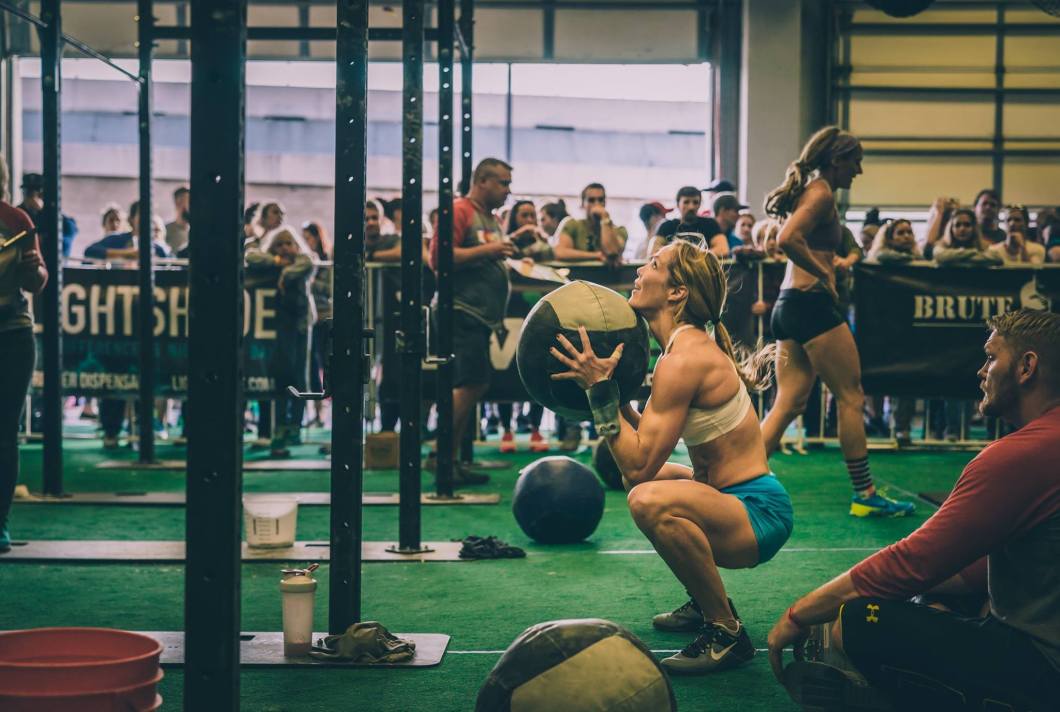